Time for me to quote one of my favorite poems by Shel Silverstein:

Layin’ in the sun,

All ran away and hid

From one little did.

It’s happened to me quite a few times… and I can tell you, nothing is worse than that sense of regret after a missed opportunity. When you have a chance to do something, do it! Don’t wait… because that chance may never come again. Actually, I wrote a poem about opportunity- it’s called “The Visitor.” Check out the Short Stories and Poems page to read it. 🙂

You may have heard a lot about acceptance. You know, that you should learn to accept things for the way they are… and that’s true. To a certain extent. The thing is, you need to be able to accept things, but you also need to know when it is in your power to change things. If something’s happening, and you don’t like it, don’t complain to all your friends and family about how terrible it is- do something about it! Complaining will solve nothing… knowing what to do will solve nothing, if you don’t put that knowledge to use!

All that crap you hear about “one person can make a difference” and “you can change the world”… well, you know something? That crap is true. Don’t listen to anyone who says it isn’t. Don’t get discouraged… just keep trying. It’s like this quote:

“Even a fool knows we can’t reach the stars, but that doesn’t stop the wise man from trying.”

Don’t let those fools fool you. Because there will be people who will tell you flat–out that you can’t. And it’s your job not to listen to them and keep trying anyway.

Yeah, I totally came up with that myself. Pretty good, huh? 😉

My dream is to get my book published and become an author… and you know what? It’s going to happen. Because I’m going to make it happen. No matter what anyone says.

I found this when I was looking for a song for one of my school projects. I really like it because both the music and the lyrics are great. Usually it’s one or the other, but this is one of the few times when it’s both:

I’m sure you saw this coming as the second reason. Family and friends first, right? 😛

Let me just say that without my friends, I couldn’t live. They always know exactly what to say or do. Whenever I need to talk to someone, they’re always there, no matter how stupid the things I have to say may be.

So, at the risk of sounding really mushy-gushy and cheesy, I feel the need to say I have the best friends in the world.

I’m just thinking about how lonely it would be to have no one to talk to or hang out with… no one to comfort you when you’re feeling low… so just knowing that there are people to turn to makes me smile. I just feel so thankful.

I really think that friends are perhaps the greatest gift the world has to offer. True friends are hard to come by, so don’t take them for granted. Treat them with utmost respect. If you know someone who understands you, who thinks the same way you do, who sees things just like you… well then. You are a very lucky person. Don’t ever forget it.

One of my favorite friendship quotes: “Friends are the most important ingredient in this recipe of life.”

One more- I couldn’t resist: “A friend is like a rainbow. [(S)he] brightens your life when you’ve been through a storm.”

Both of these quotes are from The Friendship Page; check it out if you want to read more awesome quotes.

So, to end on a happy (and hopefully not to cheesy) note, I just want to say thank you to all my amazing friends out there- you know who you are. 🙂

And one more thing- don’t forget, National Friendship Day is the first Sunday in August- this year it’s August 7th! 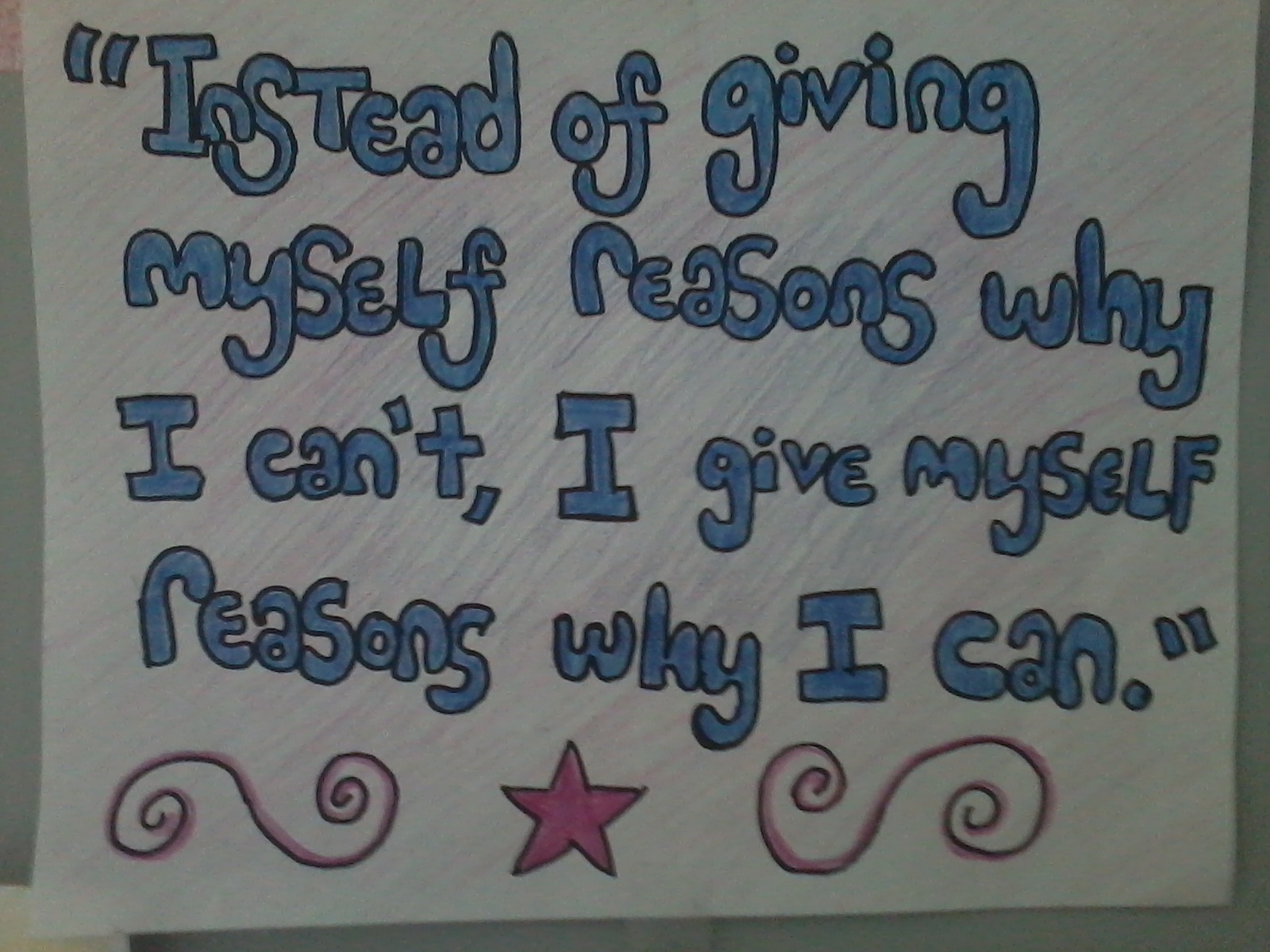 Sorry I didn’t update my blog last week. I meant to, but finals are coming up and school has been  keeping me pretty busy.

Anyways, I have fallen victim to writer’s block countless times, so I figured I might as well do a post on it. When writer’s block strikes, there’s only one thing to do-

I think that the reason people are afraid to write when they get stuck is that they want it to be perfect right away. This is true especially for really strong writers, or anyone who has written something that (s)he’s remotely proud of. Think about it- if you’ve written something amazing once, it’s easy to feel that your writing after that one time isn’t living up to its usual standard. I’ve felt that way so many times- the way I describe it is that “I’m regressing.”

But I’m not. Because NO FAMOUS AUTHOR IN THE HISTORY OF THE WORLD HAS EVER GOTTEN IT PERFECT ON HIS/HER FIRST TRY.

That’s why your first draft is called your rough draft. You just have to WRITE and push through that first draft, no matter how painful it might be. Force yourself. Once you’ve written it, you should feel great- because the story’s down. Even if it’s written in crappy language and you hate it, still, rejoice! Because it’s been written down. And all you have to do is revise to make it reach the level of perfection that you want it to.

The quote in the picture is one of my favorites because it’s encouraging, but it’s not too cheesy. Whenever I feel like giving up on my manuscript, I look at this quote (it’s taped to my wall, along with a bunch of other quotes I love).

One thing I forgot to mention in yesterday’s post (More About Adverbs) is that when you use a thesaurus to replace a word in your writing, you have to be careful not to change its original meaning. No two words in the world mean the exact same thing – that’s why they are different words. Even “he shouted” and “he yelled” have slightly different connotations. But more often than not, that slight difference in meaning doesn’t matter, and you can interchange those words throughout your writing.

But there are times when the thesaurus gives you a word that doesn’t make sense in your context, or, even if it does make sense, it chops up your writing instead of letting it flow.

Example: Her heart was pounding. “Are you sure?” she asked.

A thesaurus option: Her heart was pounding. “Are you sure?” she inquired.

Okay, so they mean the same thing. “To ask” is the same as “to inquire.” But “inquired” sounds so unnatural and awkward. Especially in this context. Her heart is pounding, right? That implies suspense. So, picture your reader, rushing through the pages of your book, wanting so badly to know what happens next- and then you throw in a word like “inquire.” What’s your reader going to think? What the heck? Yeah, that’s about right.

“Inquire” sounds so formal and awkward. It’s not right when you’ve got hearts pounding and action going on. The word jolts your readers and almost pulls them out of the world of your book. It reminds them that it’s not real. You do not want to do that to your readers.

Usually, it’s really easy to tell what sounds weird and what sounds right. When you let other people read your work, they will tell you as well. But here’s a general rule of thumb that I follow when using a thesaurus: If I’ve never heard the word in my life, I don’t use it. To me, when I use a thesaurus, I look at the words and think, Oh! That’s right! I completely forgot about those words! Or I think, Yes! That’s the word I was looking for! The thesaurus is really more to jog my memory than to learn new words. But I’m not saying that you should never use new words- it’s just that if you do, make sure you look them up in the dictionary and are completely sure about the meaning. Don’t pull them straight from the thesaurus. It also helps if you look at examples that use the word in a sentence.

Even the way a word sounds can determine whether you should use it or not, even if it has the meaning you’re looking for. Did you know that the word “pulchritudinous” means “beautiful”? If a guy had called me that and I hadn’t known what it meant, I think I’d have hit him!

Edit: The title of this post is part of a quote by Mark Twain. Check out the Quotes About Writing page to read the full quote!

I suppose this is a sort of follow-up to yesterday’s post about the robin in the birdbath. There’s a poem by Shel Silverstein that I kept thinking about while I was writing that post, and last night I went up to my room and looked through Where the Sidewalk Ends until I found it. Here it is:

When you stop and try to see it

From the turkey’s point of view.

When you see it from the viewpoint

Of a chicken or a duck.

Oh how I once loved tuna salad

Pork and lobsters, lamb chops too

Till I stopped and looked at dinner

From the dinner’s point of view.

Oh, if you’re a bird, be an early bird

And catch the worm for your breakfast plate.

If you’re a bird, be an early early bird-

But if you’re a worm, sleep late.

We always hear the phrase, “The early bird catches the worm,” but what about the worm? I guess you could say, “The early worm gets eaten.” It’s interesting to see things from the worm’s point of view.

I was sitting on the bench in the garden today (once again observing birds), and I saw a cute little robin walking around with two worms in its mouth. It was trying to pull out a third one, but it just couldn’t hold them all in its beak! So when it finally managed to pull the worm out (it was an enormous worm, by the way – almost as long as the robin itself!), it would walk a few steps, drop all its worms, hunt around for them, pick them up, walk a few more steps, drop all its worms…

Robins are such funny little birds. Of course, I could pick on sparrows too, or cardinals. In fact, most birds I can think of look silly at one point or another.

But then again, most people I know look silly at one point or another (myself included)!