Thanksgiving is my favorite day of the year. I even like it better than Halloween and my birthday. Each year on Thanksgiving, we invite close friends over and my mom cooks turkey and makes other Thanksgiving-related foods. I love it not just because of the food (although it is delicious), but also for how nice and warm the house feels when everyone comes over.

I love the loud conversations and hearing everyone laugh. I love playing games with the other kids. And I love it when the fireplace is crackling and everyone is just sitting around and talking.

The day before Thanksgiving is also great. My family is rushing around trying to make sure the house is clean, and the anticipation keeps building and building until Thursday at 4:30 pm when I’m just sitting and waiting for people to show up. And my mom is cooking turkey and stuffing and the house smells amazing.

And of course, the day after Thanksgiving is great because we get to eat leftover turkey and cornbread and mashed potatoes and drink turkey soup.

I know not every family spends Thanksgiving this way. But there’s this part of me that feels, regardless of how it’s done, Thanksgiving should be spent with family. So it made me kind of sad when I heard that Black Friday deals started early this year and people spent Wednesday and Thursday shopping. It also seems ironic that a day that should be spent being thankful for what you already have is instead spent shopping for more things.

It’s always bothered me that of all the holidays, Thanksgiving seems to be the most neglected. People go right from Halloween decorations to Christmas lights. Stores play Christmas music. I mean, I know there isn’t really any Thanksgiving music, but couldn’t we hold off on the Christmas carols until December? With poor Thanksgiving already being sandwiched between Halloween and Christmas, and now Black Friday encroaching upon it, it really seems like it is being stolen.

I don’t have a problem with Black Friday being on Friday. But it does make me upset when it starts kicking Thanksgiving, my favorite day of the year, out of the way.

The Grinch may not have succeeded at stealing Christmas, but it seems like Black Friday is getting closer and closer to stealing Thanksgiving. 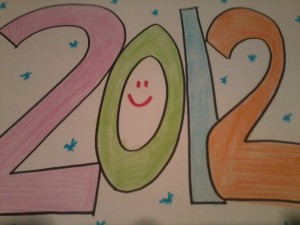 It’s funny how a person can change so much in just one year. I feel… more grown up, somehow. I seem to understand life, in general, much better, and I’m able to recognize things and form opinions for myself. The things that mattered so much to me last year don’t seem to matter anymore. Don’t get me wrong- 2011 was a great year. I learned a lot, and that’s why I’m ready to make a fresh start in 2012 (since the world has not ended).

1. Finish my manuscript- entirely! This includes revising, editing, and having it proofread by others. Before the year’s over, I want to hold a polished manuscript in my hands  and start submitting query letters to agencies. No more procrastinating!

2. Stop worrying about little things. As calm and unruffled as I try to appear, on the inside I’m often worrying about stupid things that don’t matter anyway. No more of that!

3. No regrets. Too often have I let opportunities slip away from me. Not anymore. The worst feeling in the world is wishing you would have done something when you had the chance. It’s one thing to get up and actively seek opportunity and not find it… at least you tried. But it’s another thing to have it offered to you on silver platter and ignore it.

4. Stop getting lost in the past. This one is hard for me… I keep thinking of good times I had in the past and let the memories overwhelm me…. when what I should be doing is turning my head around and facing what’s to come! It’s like Dr. Seuss said: “Don’t cry because it’s over. Smile because it happened.”

5. Look for the good in people. I am not a mean person… I don’t think I ever have been. But I do get annoyed with people, and there are people I don’t like and could complain about. But instead of seeing faults like this… I’ll try to focus on the good things. Even in the people I dislike most.

Well, I think five resolutions is good enough for now… but I’m sure I could easily add to the list! I think new year’s resolutions are a great way to reflect on last year and get a fresh start on this one. The best part is reading your resolutions at the end of the year and seeing if you fulfilled them. Even if you didn’t, they’re still fun to read, and it just means that you have more for next year. 😀

I meant to post this yesterday, but it must have slipped my mind… I guess I might as well wish you a happy Black Friday as well!

Whether you eat turkey or not, I think Thanksgiving is a holiday everyone should celebrate… not necessarily by doing anything lavish or fancy, but just by appreciating how lucky we are. In fact, if you think about it… each day can be Thanksgiving. All we have to do is remember the things to be thankful for in life.

If I’m ever feeling down or upset, it helps to look at the big picture. Sometimes we get so caught up in school or work or whatever that we forget what’s truly important. Family, friends, passion, love… much more important than a quiz. At my school, a lot of people constantly worry about their grades. But you know what? If you get a  B on a test, the world isn’t going to end. Robert Frost said it: “In three words I can sum up everything I’ve learned about life:

My friend and I came up with something at school the other day: A’s are pretty, but they’re not life. Life is trying something new and discovering things you hadn’t known before. Life is doing your best and taking risks. Better to try and fail than not to have tried at all. Better to have gotten a B and enjoyed yourself than have gotten an A and stressed out so much that you ripped all your hair out.

That’s not to say you should be completely lax in anything concerning school… but it’s important to remember what truly matters in life.

And I think Thanksgiving’s the best time to do that. I hope you had a happy Thanksgiving and continue to have a happy life! Make sure to spend lots of time with your family and take a break from work or school!